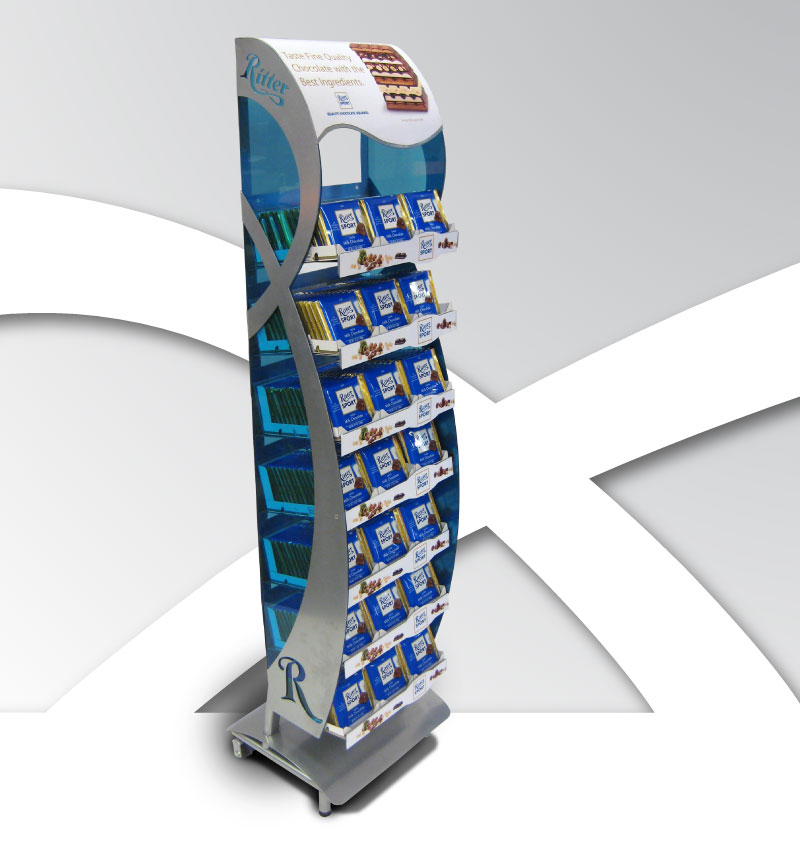 This is a retail display for Husky Foods, to merchandise one of their many products called Ritter Sport. Ritter Sport is a high end, German chocolate that does not have the advertising budget and thus brand penetration than many of the competing chocolates have. Husky was relying on myself and FX Displays to create a display that would attract attention in store, and convey the high end nature of the product.

This was the brainchild of myself and Dave Butt (production manager at FX Displays); we were trying to find a simple, cost effective way of introducing contrast into the display and not relying on graphic panels. The concept we came up with was overlaying laser cut sheet metal on top of CNC router cut plastic. This was a good solution on a few levels: it introduced branding without printing, it showed off the product and was simple to apply at production level.

After the brainstorming session, I developed the concept using typical industrial design sketching. I then created a concept model in Solidworks, and rendered it in the then new Photoview 360. After the concept was picked up, I detailed the model and used it to generate the dielines for both the sheet metal and the plastic. The unit was prototyped, and the prototype was tweaked for the production run. It featured a removable base so the display could be used as a sidekick if necessary. This unit was produced 150 times, and is found primarily in Sobeys, but also in Loblaws stores like Independant Grocer.