A high-end display for Sony to introduce their suite of HD products. 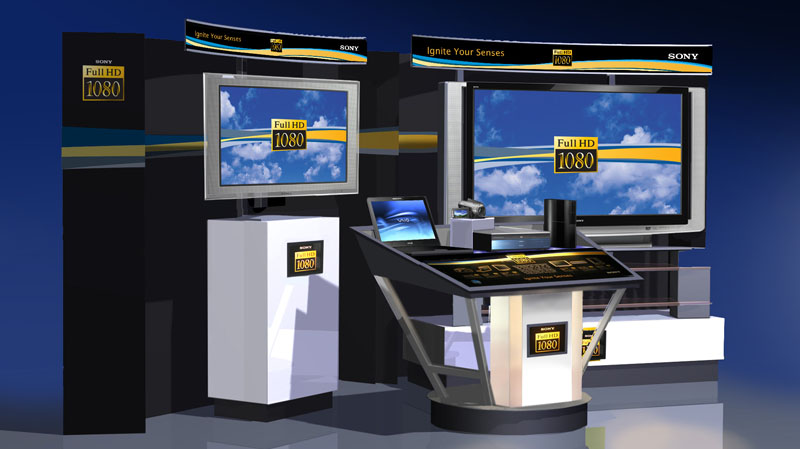 This was a retail display for Sony to show off their suite of HD products. I helped on this project when I was the Junior Industrial Designer with a Graphic specialty at Red Leaf Retail.

When HDTV was the new thing in electronics stores, Sony was the only company to have all of the products in HD from capturing, editing, and playing. They had HandyCam camcorders, VAIO laptops, Bravia / SXRD TVs, and the new Playstation 3. They needed a display to educate their customers on the HD product ecosystem. This was not a display to merchandise product, but rather one to educate people. This was to be placed in Sony Stores, other retailers and malls.

The concept was created by Chris Potter, the principle designer at Red Leaf Retail. My role was to take Chris Potter’s vision, develop it and make it a reality. I also did all graphic design for the display; the graphic concept was later used on the HDNA campaign Sony Canada ran later. I used Solidworks to develop the form and create renderings using Photoworks. I had a mark 1 appearance prototype made for Sony’s dealer show to present to potential retailers. There were several manufacturers to be coordinated on this display. Using a fully detailed assembly of the display, I created technical drawings for all of the parts to be produced from and know there wasn’t any fit or interference problems.